The last two nights I have been working nonstop in my sleep.  I have been dreaming up interview questions for future authors I want to interview.  I have been making my list of those to invite to my book launch party I want to have in October.  I have been planning my book blog party on-line.  This has been crazy.  It is too bad that I can’t attach a USB connector into my ear and download all the great ideas I had before I woke up the past two mornings.

I was literally drained yesterday morning when my two grandchildren arrived for me to watch.  We had a quiet early morning just watching movies and shows on the television.  When brother went down for his nap, big sister and I got out the crayons, markers, stickers, and paper to sit quietly on the floor to draw and create quietly while watching Christmas Movies (she picked out what she wanted to watch).  After sister made her first picture she started to try to fold into an airplane (I think they must have done this at preschool recently).  It has been years 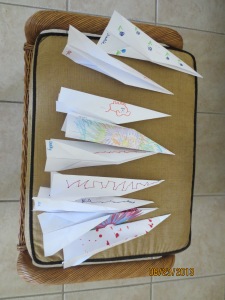 since I made a paper airplane and had to go online to find out how.  The first search led me to a video which I didn’t want to sit and watch.  The second search led me to a complicated 12 step process.  Way too much for my already overworked brain.  The third search was the charm with a simple five-step process.  I made the first one and she began decorating it.  We continued making more airplanes and decorating them.  We even did some spin art online thanks to a children’s website and made airplanes out of the printed pictures.

Before long we were having airplane races in the living room and I had completely forgotten about all the things I was trying to focus on and instead focused on making memories.